The first direct communication between senior administration officials in the US and China, a meeting in Alaska last week, accomplished little and was capped by a fairly heated exchange of criticisms in front of the press.  The Biden administration has already signaled some tactical changes from the Trump approach to China.  But so far it seems the overall strategy won’t change much in substance and tone.  China shouldn’t be surprised.

Trump gets the attention, but China’s policies are driving the US position

Trump’s fiery rhetoric and antics get much attention so it is easy to think any issue is about him.  However, Donald Trump has a legitimate gripe about China.  Furthermore, although Chinese President Xi Jinping has a much more low key style, the actions taken by his administration even in the last few years could have had no other impact but to harden the US position, regardless who is in the White House.  Sometimes it seems China doesn’t realize this.

In another article we outline the six changes in China that necessitate a recalibration of policy in the US and its allies, including the stall in China’s economic reform program, its rollback of political freedoms, and its more assertive foreign policy.

The US approach to China must continue to evolve 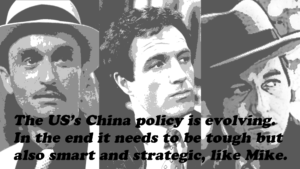 Most of these changes occurred during the Obama Administration which failed to react in a substantive way.  In that sense, we could refer to President Obama as the “Fredo” of US policy on China.  Donald Trump changed the narrative and successfully coalesced opinion on both sides of the aisle for a tougher approach to China.  But Trump took a shotgun approach, picking fights that didn’t need to be picked, unnecessarily inflicting collateral damage.  Trump had the right strategy, but some tactical shortcomings.  In the end he was the “Sonny” of US policy on China.

President Biden needs to be “Michael”—tough but smart and strategic as well.  Time will tell if Biden can build and improve on the foundation laid by his predecessor.  Biden has not hastily altered any of Trump’s policies and, as a first step, is working to build a united front with like-minded allies.  Since Trump’s unilateral approach was one of his tactical shortcomings, that’s a good start for Biden—same basic strategy, better tactics.

Almost everyone agrees that China should remove unfair practices

Many opposed the Trump Administration’s use of tariffs.  Very few disagreed with the overall objective which is to compel China to change its unfair economic practices. Despite the tariffs and a Phase One Trade deal, China hasn’t moved much relative to the most serious complaints against it including market access for foreign companies and subsidies of Chinese companies.  Thus, not only Republicans and Democrats in the US but allies in Europe, Japan, and around the world continue to be united in their desire to see China change these practices.  So it isn’t a surprise that the Biden Administration is not backing off these objectives, even if the tactics might change somewhat (they haven’t yet).

As another example, when Australia suggested there should be a more independent investigation into the origins of COVID-19, China responded by placing trade restrictions on a number of Australian exports to China including coal, barley, and wine.  Note Australia didn’t do anything.  It just made a statement which China took as a criticism.  China decided that warranted an economic payback.  That is not how most countries deal with diplomatic statements.

As a final example, China’s rollback of political freedom started ten years ago but continues to intensify to this day.  Relatively incremental changes in Hong Kong’s political system have given way to a full commitment on the part of China to remove any semblance of actual democracy in Hong Kong.  The CFO of Chinese tech giant Huawei, Meng Wanzhou, was arrested in Canada on charges related to violating US sanctions on Iran.  Meng was released on bail, kept in house detention, and is defending herself in public, transparent proceedings with the support of legal counsel.  In response, China arrested two Canadians on “national security” related charges, has never disclosed the details of their supposed transgressions, keeps them confined in prisons, has afforded them no independent legal counsel, and just last week began a “trial” which will be closed to the public.

It gets better.  China not only takes this approach, it then argues that its system of governance has proved itself to be superior to that of America and other democracies.

Opposition to China is inevitable given China’s chosen path

There are many more examples.  The point is that you don’t need Donald Trump’s fiery rhetoric to get the American people to oppose this type of behavior.  The same goes for America’s allies.  China used to be a large country with a relatively small global footprint that was moving gradually toward a liberal society.  Over the last decade or so, China has become a large country with a growing global footprint that has not only turned away from liberalization but is actively promoting an authoritarian agenda.  It doesn’t matter who is in the White House.  This won’t play well in America or among the advanced democracies in general.  If China is expecting an improvement in US-China relations, it doesn’t understand America very well.

Will Biden be Fredo, Sonny, or Michael on...

WHO Findings in China…”We still don’t know for...