As China releases its 14th 5 Year Plan, it is important to remember that China’s plans only work when it moves toward the market

A plan is like a resolution—easy to make, hard to keep.  We should keep this in mind as we China announces its 14th Annual Plan in conjunction with the National People’s Congress underway this week.

Big plans for a big country

This is the time of year when China looks most formidable, announcing its ambitions and intent, which always look big because China, with a population 4.5X the US, is huge.  Given China’s growth record since 1980, many are mesmerized by the very idea of “The Plan,” as if preparing a plan is a key driver of the growth.  Some go as far as to say that America should commit itself to a more proactive government planning.

Before economic reform, China never met the goals in its plans

Ghost towns are an example of failed planning

The planning enthusiasts also have a tendency to focus only on the successes and ignore the failures.  They point to China’s government subsidies and investments alongside China’s growth and insist that the former causes the latter.  They don’t mention the excess investment that has led to ghost towns, thousands of empty apartment complexes, bridges and roads to nowhere, and extreme overcapacity in a wide range of industries from steel to autos. They also don’t mention the extreme debt burden, more than 300% of GDP which this investment has created.

The same goes with industries.  They point to telecommunications giant Huawei as an example of the success of China’s industrial policy.  They don’t mention the auto industry, which employs more people than just about any other industry and would be considered a desirable industry by any industrial planner.  China has tried to give every advantage to its own auto producers, most of whom are state-owned.  Yet China’s auto exports are very low.  Foreign auto producers dominate the Chinese market for passenger cars and China’s private auto companies outperform the state-owned auto companies.

Family Planning has become a huge failure and problem 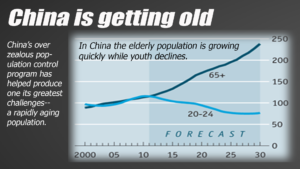 Then there’s the issue that perhaps represents China’s greatest attempt at planning—family planning. It is widely accepted that China’s rapidly aging population presents it with a huge demographic and economic challenge.  To a large extent China’s aging population is a result of the one-child policy instituted in 1979.  In the late 1990’s, demographers, including some within China, began sounding the alarm that population in control in China was working too well, births were too low, and talk of an aging problem in China began.  Although China’s aging problem was widely recognized relatively early, it wasn’t until 2015 that China began to loosen its one-child policy, long after the problem had been widely recognized.  Now, in part because the one-child policy impacted China’s culture, very small families have become the norm in China and it is proving very difficult for China to reverse the aging problem.  If China is so good at planning, why did this happen? 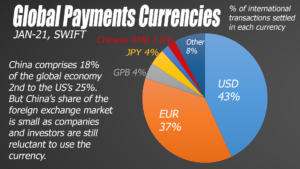 One final example.  According to the IMF, China’s share of global GDP is roughly 18% versus 25% for the US.  But, relative to global foreign exchange transactions, China’s currency, the RMB, accounts for 2% while the US accounts for 44%.  Furthermore, the US share has been increasing more than China’s even as China’s share of global GDP increases.  Keep in mind, China has had a “plan” for internationalizing its currency for more than 10 years.  It has taken many steps but missed most of its goals.  In an article published this week by the Nikkei newspaper in Japan, Masaaki Shirakawa, a former governor of the Bank of Japan, speculated that utilization of the RMB remains constrained because “Chinese authorities seem to be cautious about embracing full-fledged liberalization of financial markets…(possibly due to) their concern about having to submit to the rule of law, which is a prerequisite for financial deepening.”  Mr. Shirakawa is saying that, without liberalization, China won’t meet its goals for the RMB.  He goes on to say, failure  to meet those goals will also hinder China’s overall growth.

Mr. Shirakawa is absolutely correct and neatly summarizes the point of this article.  Planning is easy and even fun to do.  Executing a plan and meeting goals is much harder.  Frankly, China’s track record on meeting goals is less impressive than many think.  Moreover, the pattern is clear.  When China plans on more liberalization and less government control, China moves towards its goals.  When the government stays in charge, China falls short.  That’s been the pattern.  I wouldn’t expect it to change.

Will Biden be Fredo, Sonny, or Michael on...

WHO Findings in China…”We still don’t know for...